There’s this notion in Buddhism about impermanence: nothing can last forever. I think that’s not only true but necessary to accept, whether or not you’re a fan of Buddhism.

I write this entry as a rambunctious puppy named Coconut (or Coco-nutso) currently lays sound asleep across my lap, preventing me from sitting upright without squishing her a little. She’s snoring-snorting every now and then. When she sleeps, she’s heaven. Silent, peaceful, at ease. But at some point, she wakes.

She requires constant attention, and if she doesn’t get it, she barks until you give in. Her favorite toys are those that are loud. Extremely loud. Or toys that don’t belong to her at all. Playthings like my underwear, tissues and other assorted paper goods, the vegetable plants that are beginning to flower, and so many other seemingly safe objects. Anything at her short puppy-height stature is irrevocably hers and at her disposal.

She’s ruined plenty of things. My husband’s leather wallet that probably tasted like a bacon-flavored treat which now has a corner of bite marks. Our rugs, which she believes to be pee pads since they’re softer on her derriere. Mail which we never read and never will be able to again.

And as a former perfectionist who took immaculate care of every item in my possession, I can say truthfully and happily, it’s all okay and I accept it.

The things Coconut has destroyed are minimal, but they serve as a metaphor for something a teeny bit more important but no less impermanent. 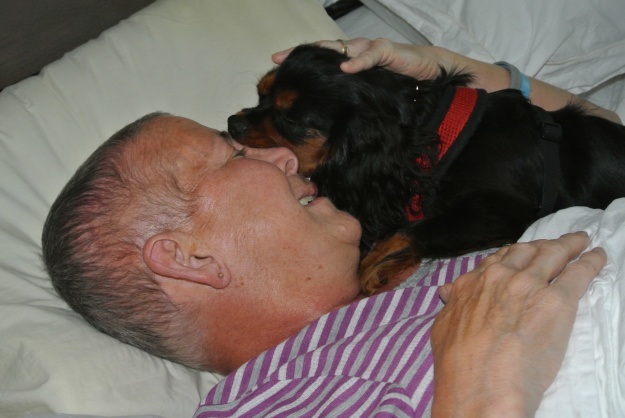 my mom with coconut, or coconut with her nana, both happy

My mom is dying. She has Stage IV glioblastoma that resides in the right hemisphere of her brain and over half of her brainstem. She has lost her ability to move, speak, hear, feel, and live without multiple people assisting her at all times. She has hospice to make her transition as comfortable as possible.

And now I realize something: they call it a transition for a reason. She will not just cease to exist. She will become something else, in something else, in body, and in mind. Her heart is a big part of mine, and if I am so lucky to have a family one day, her heart will become a part of theirs too. One day, her body will be a part of the earth and become something new. A flower on a farm in Pennsylvania, a mourning dove by our bird feeder, and a piece of coral on a beach in Bora Bora, perhaps.

She is not mine to keep. She is not even hers to keep. To think that any of us could prevent her from transitioning would just be selfish. The truth is that all of us are dying a little bit everyday, not just her. I know I’ll transition one day and I hope more than anything I come back on a shore in Bora Bora with her.